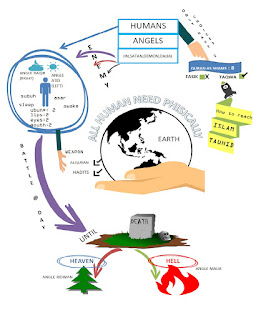 Here are the explanation of picture above

There are 3 kind of creature that Allah made in this universe:

1. Human, made from soil. human is in the very first place position, the most perfect creature, and the main character in this story.

3. jin, satan, demon, made from fire. The enemy of humans. Satan were an obedient angel at first but when Allah create human and ask them to bow to human, they reject, and after that they ask Allah to allowed to live untill the end of the world and they have a promise to bring human to hell.

Yeah, its somehow simple, our life I mean, as a human. we live, and then death. But there is a mission of our life. Human as the most perfect creature because we have a brain, we have a will. We are free doing anything. The thing is, it is right or wrong. Not like angel who only being created only to obey Allah and has their own task. Unlike satan, who become evil because of their greed and arrogant and they are surely will stay in hell forever. Unlike all the creation in the earth and space, we call it universe, include animals, plants, rocks, mountain, land, star, planet, everything in universe except that three creation, will disappear.

That three creation (human, angel, satan) will all dead but then live again to stay in “akhirah” (world after death) forever. And in this akhirah, there only two places to live, heaven and hell. The lowest hell will be like we are standing in a shoes of fire and it could melt our brain. The lowest hell is already that scary, can we imagine how the next level of hell will be?

So as a human, as a creature who will live forever after death, we are faced with the reality that we will stay wether it is heaven or hell, that’s a human goal in fact. So how we could reach heaven or avoid hell, that’s become our task.

Allah have send key to reach that heaven or how to avoid hell. Human weapon is only 2, Alquran and Hadits. The key to enter heaven is being islam and tauhid. Tauhid means only believe, only obey Allah.

The meaning of human battles everyday until death is satan always try to make human in hell with every possible way, like doing the wrong thing etc. so our weapon is only alquran and hadits in order human to become taqwa.

It is not something fiction, this is real, and this is happening.